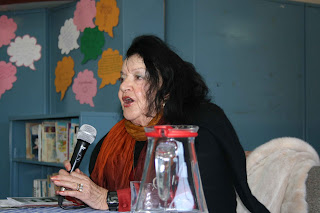 Ms Faye Cukier visited San Anton School to promote and talk about the book she's written called Fleeing the Swastika, a gripping true tale of her youth spent travelling all over war-torn Europe.
World War Two was a gruesome chapter in the history of the Twentieth Century. There was the rise to power of the Third Reich which eventually led to the beginning of a terrible war that embroiled all the countries of the world. However, as time goes by, events tend to move farther and farther away from memory. Sometimes this is beneficial, at other times it's not. Very few persons who lived through this terrible ordeal are still alive, and therefore it was quite a privilege to have the author of Fleeing the Swastika coming to school.
Ms Cukier is a charming and elegant lady of Jewish origin, whose gentle manners belie a difficult past replete with adventure and hardship. She remembers vividly the hasty moving from one city to another in order not to be discovered by Nazis during World War Two. But things had not always been like this.
Ms Cukier's life started full of promise. Her father was a successful businessman who could afford to raise his family in relative comfort. However, as the Nazi government gained in popularity, the Cukiers found it more and more difficult to get by. This forced Ms Cukier and her mother to leave Germany for Brussels. They made their move just in time as a few months later saw The Night of Broken Glass, in which Jewish homes, shops and synagogues were demolished.
Life in Belgium wasn't easy either. First of all Ms Cukier was told that she had to wear the Jewish yellow star, something she refused to do. However, acting upon the suggestion of a friendly policeman, she dyed her hair blonde so as not to look Jewish. During this time she also got involved in the diamond trade in order to help her family survive. It was an arduous period in which Ms Cukier had to be constantly on the alert.
But with the end of the war, her family was liberated and eventually got her lifelong dream of going to America. Still, some sad moments persisted as Ms Cukier had friends who had perished in the streets and in concentration camps. And this was one of the reasons why she ventured to write this book - as a tribute to all those who suffered during such a terrible war.
Posted by Library at 12:18 pm No comments: