Popular children's author Marcus Sedgwick visited San Anton School last week. His books, amongst which are Floodland, The Book of Dead Days and My Swordhand is Singing, have won and/or been shortlisted for numerous awards.

He is also the author of The Raven Mysteries, a series of books featuring the Otherhand family, an assortment of charmingly bizarre characters who live in an old castle. Undoubtedly, the hero of these stories is Edgar, the pet raven who acts as the voice of reason amongst all the odd goings-on that happen in and around Castle Otherhand.

The Grade 7s knew about The Raven Mysteries and were keen to meet the author who created this marvellous world. In they trooped, and took a seat in the library. After a brief introduction, Mr Sedgwick took over.

(Images in the video were taken from http://www.petewilliamson.co.uk and http://www.ravenmysteries.co.uk/.
The song used is Roustabout by Beats Antique and remixed by Bassnectar.)

His soft-spoken yet confident manner won the children over immediately. He took them on an extensive and detailed tour of Castle Otherhand, discussing the strange characters and creatures that inhabit the numerous rooms. Such as Lord Valevine Plantagenet Vesuvius Ropey and his laboratory, the place where unfortunate frog experiments take place. Or else Solstice's knack for writing soporific poetry. Or Cuddleweed's perpetual hunger and bone-rattling nervous disposition. Or the gigantic, mysterious tail of the unseen creature that dwells in the darkest recesses of the castle. 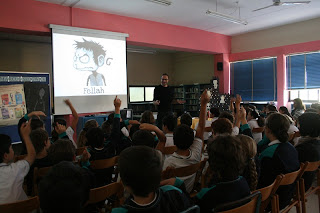 Despite all the information that Mr Sedgwick supplied, the students still had loads of questions to ask. Some of them were about the Otherhand books, some were about his other novels for older readers, whilst others concerned the art and craft of writing. Mr Sedgwick was kind enough to answer all their questions. Afterwards he also signed their books.

It was a very successful visit that the students enjoyed immensely. Thank you Mr Sedgwick! 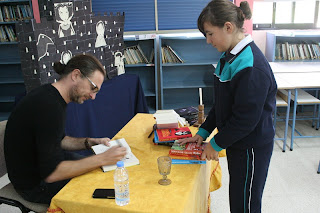 Posted by Library at 3:18 pm No comments: