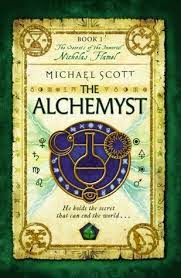 The Alchemyst is the first novel in the popular series "The Secrets of the Immortal Nicholas Flamel" by Michael Scott. It revolves around twins Sophie and Josh Newman, who after a battle between two immortal magicians find themselves flung into a world of magic. They race across America, encountering monsters, fighting the dead, seeking refuge in shadow realms and much more.

I  found this book to be extremely enjoyable as Michael Scott incorporates a magnificent blend of mythology and fantasy. Ranging from Greek and Roman gods to Norse, Egyptian and Irish myths, this novel is brimming with surprising twists and turns. The author also deals with elemental powers, colourful auras and legendary and historical figures. Most important of all the book sees us through the complicated relationship and frequently changing emotions and views of the twins.
by Andre' Buhagiar

Posted by Library at 9:39 am No comments: