A number of guest speakers visited San Anton School to celebrate World Book Week, a five-day long book bonanza that has become a staple in the school's calendar. 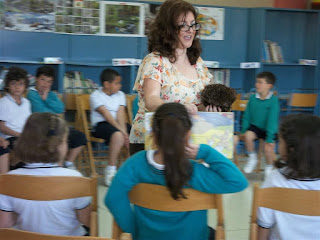 The week kicked off with Rita Antoinette Borġ, an award-winning author who is always a hit with the young students. Ms Borġ introduced the Grade 4s to her colourful puppet parrot that hails from Australia, which in turn sparked off a lively discussion about different animals endemic to different continents. Immediately afterwards, Fuxa made her appearance. The hero of Ms Borġ's book is an enterprising hedgehog who decides to cross a very busy street, giving everyone a huge fright. Thankfully, everything turns out for the best, and Fuxa and her friends put an end to the adventure by indulging in a scrumptious picnic. 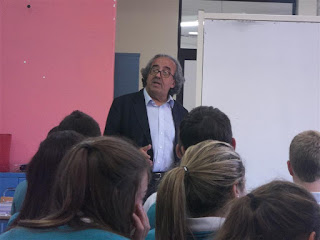 Professor Joe Friġġieri certainly needs no introduction. He is one of the leading scholars and authors on the island, and who currently has two of his poems included in the Matsec syllabus. He was kind enough to visit the school and talk to the Grade 11 students about his poetry and the rest of his impressive oevre, which includes short stories, plays, academic essays, research and and even song lyrics. It was a stimulating talk, peppered with a lot of Professor Friġġieri's erudite anecdotes about characters and events that influenced his work and piqued his intellectual curiosity. 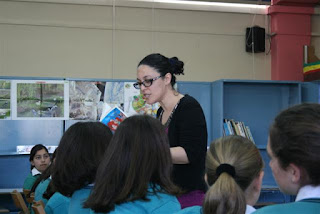 Clare Azzopardi is unarguably one of the most loved children's authors. Her series of books featuring the meanders of sweet Jake Cassar, and the two books about the nefarious machinations of the notorious Saver DeMolizz, have helped not a little to encourage children to read. Ms Azzopardi visited the school to talk to the students about the second instalment in the DeMolizz saga, U llum jispiċċa l-każ tal-aħwa DeMolizz, which was launched late last year during the Malta National Book Fair. A lot of the Grade 8s were excited about the talk because they had already read the first book and were really curious about the second volume. 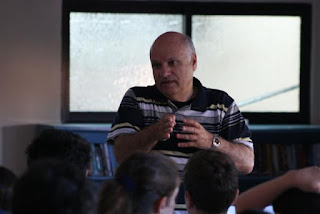 Trevor Żahra visited the Grade 9s who are currently using one of his books as a reader. Fuklar Qadim u Bnadar Imċarrta is a class text and the students were really looking forward to meeting the author of one of their favourite books. Mr Żahra delivered an engrossing presentation on Fuklar, replete with intriguing anecdotes and several words for thought about aspects of the book that might well pass under the radar on a first reading. The session ended with an animated Q & A session that spilled over to creative writing, how one can harness the imagination and book publishing in general.
Posted by Library at 3:43 pm