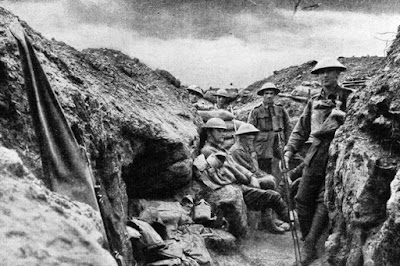 My name is Adam Scott. I live in Regent Street, London. I am 17 years old and the youngest in my family. My father and my two older brothers are fighting on the Western Front and my older sister is a nurse in a military hospital in Malta. They are the heroes of the family while I am left here with my mother.

Today I decided to take a stand. I went to the recruiting office and lied about my age. I told the officer in charge that I wanted to join the war effort. He said that I could start on the 1st of February and that I would have to go to Cardiff. Then I thought of the horrid part - telling mum! I went back home and told her. She wept buckets. She told me not to go but I said it was for my King and for my country.

I sent a letter to my father at the front telling him that I was joining in.

I took the train to Cardiff. It seemed like a very long journey. When I told the officer that I was a new recruit he put me with a platoon in Hut 6. I got a big welcome. The soldiers in my hut were called Danny, Charlie, Seb, Karl, Beppe and Luke and we soon became the best of friends.

I heard that they're fighting in Verdun. Everyone wants to go to the Front.

We are finally going to the Front. We marched to Plymouth, thinking that everything will be over by Christmas. We travelled to Belgium by boat and a lot of people got sick, including me. The sea was quite choppy.

We arrived at Chattencourt and got sorted in. Luckily, I am with my friends.

Today we went to the trenches. I was horrified by what I saw. There were rotting bodies and carcasses and lots and lots of mud. This wasn't what I had imagined. So this is where I'm staying for the next few months. I took my position and started shooting. One time I saw my bullet fly into an enemy soldier's stomach!

Finally I am back at camp. I was all dirty with mud, tired and deaf because of all the explosions. I rushed to be the first to have a nice hot shower.

Today I went on a secret mission. I had to protect some engineers from an attack. I was trapped in a cave. My whole body was burning.

I came to in a strange place. Karl was there. "You're in hospital."

"You were trapped in a cave with mustard gas. You broke your arm and you couldn't move."

A nurse came to see me. I asked her how long do I need to stay in hospital. "Two months," she replied.

Today I returned to camp. My friends were overjoyed to see me. I realized that three of them were missing. I asked after Charlie, Danny and Seb. Beppe told me that Danny was killed by shrapnel.

"We realized it was Danny because of the ring on his hand."

Charlie was hit by a piece of metal and Seb got shot. I wept for my friends.

We can hear gunfire again.

The battle is over. I made it home with a broken leg, having tripped over barbed wire. My mother hugged me tight. With tears in her eyes, she told me that my father had been killed. I came home alive but I now know the devastation that war brings. Not the glory that we had been promised.