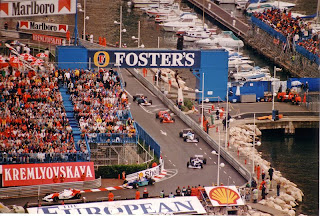 Fifteen years ago, my brother had gone to hospital because he was in a bad car crash!
It was the Grand Prix Final and he was the driver with the best chance to win. But in the last few seconds, someone crashed into his car from behind.
Now, it is my turn to take his place in the Grand Prix Final. I have a chance of winning, just like he had.
I was very careful so the same thing wouldn't happen to me. I kept checking my rear view mirror. There was this driver who was coming closer to me. I recognised that he was the brother of that other driver that crashed into my own brother!
I made sure that I wouldn't fall for the same trick so I swerved to the right and put him off track.
It paid off cause I won the race! I dedicated this victory to my brother.
Paul - 7.1
Posted by Library at 11:00 am