Horrid Henry and the Boomerang 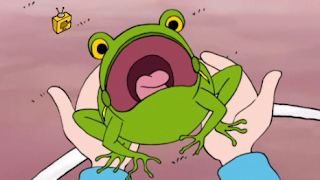 Henry was a nine year-old spoilt brat. He lived with his grandmother in a big mansion in the country. He had no one to play with because he had no brothers or sisters. He spent his time running after cats and pelting them with stones. When he got fed up making the cats scream, he threw stones at birds.

One day he met a little frog who said to Henry: "Why are you so naughty? Henry told the frog how ugly he was, picked him up and threw him towards the pond. But this frog was really a magic fairy so when Henry threw the frog up in the air, the frog turned into a boomerang and came straight back at him, hitting him on the nose.

Henry learned his lesson. He became a very good boy and everybody loved him.