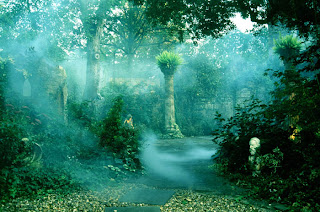 I had just turned eight when my parents decided to build a new house in Rabat, with a huge garden for me and my sisters to play in. A short while later we started building. The new house was ready in no time at all. Me and my sisters were eager to have our own bedroom.

A few days later our parents said that we could move into our new house. I was speechless. I ran up to my room and I looked out of the window at the huge garden.

Night fell and I went to sleep. I dreamt about the day ahead of me but I woke up soon after. I was hearing creepy and spooky sounds coming from outside. I looked and I saw skeletons, zombies and werewolves wandering about in the garden. It seemed impossible. Was it a dream? I rubbed my tired eyes but when I opened them again, the monsters were still there. Why were they there?

The next morning I went to explore the garden. I strolled along but my foot got stuck on something and I nearly lost my balance. It was a trap door covered in leaves. I called my father so that he would check it out. We opened it and found many stairs. We went down. There were catacombs and beyond, a dead end. I rested against the wall to tie my shoe laces but it gave way and I ended up in a bigger room. My father and I noticed that there were picture stories on the walls, and zombies and werewolves lying on the ground. A beam of light shone through the ceiling. An inscription said that every night, the monsters come alive and party in the garden.

Now I got used to them. They are very friendly and sometimes I stay with them for a bit. They are not half as bad as they look.

Please tell Gianna: Good story! I especially liked the garden setting, and hidden trap door covered with leaves, and the hidden room in the catacombs that was revealed unexpectedly. Such an adventure! I am 50 and these spooky things still thrill me too. In fact, I found your story while doing research for my Halloween haunted house that I do in my front garden. Keep up the good work!